Barry Manors was living between London and Poole in Dorset, when he ran the estate agency Chard Associates. Yet despite working in the property business, he never found a true home for himself in either location. ‘I just wanted convenience in London, and so I stayed in the Park Lane Hotel during the week; at weekends I’d go to my contemporary apartment in Poole on the harbour front, which just felt soulless,’ he says.

When Barry and his business partner Andrew sold Chard Associates, Barry went travelling to Thailand, ‘but returning to England always felt like a treat,’ he recalls, ‘and I was like a tourist in London wanting to stay in heritage hotels.’ Then when a friend invited Barry to stay in Cheltenham, he was seduced by the old English feel of the town. ‘We walked from the Montpellier Chapter (boutique) hotel and sat outside John Gordons independent wine merchants near the park for a mid-morning espresso. I didn’t know any of it was here, and Cheltenham offered the sense of community and quality of building stock with character that I craved.’

Having been an estate agent, Barry admits he had ‘a more objective take’ on finding the right property, having pinpointed the location. ‘I wanted to buy a wreck at the right price rather than something that someone else had done up. When a Regency house for sale on this terrace came up, a friend spotted it and called me. I was sat in a coffee shop in Thailand with my dog and saw it online. I said, “Let’s do a seven-day exchange,” and had a surveyor friend look at it to make sure it wasn’t going to fall down or had any structural problems.’ Barry therefore bought the house, swiftly and without hesitation or having seeing it in person, in 2011.

‘When I flew over to see the house, it was in a worse state than I had realised,’ he admits. ‘It was cold, it stank, it had been a hotel and it was divided up by so many partition walls that it was hard to see how the rooms would have originally been, and so many of the architectural features were boarded up.’ The even worse news was that the property had Saniflo toilets, which were leaking. ‘But the good news was that it didn’t have dry rot or subsidence,’ he laughs. 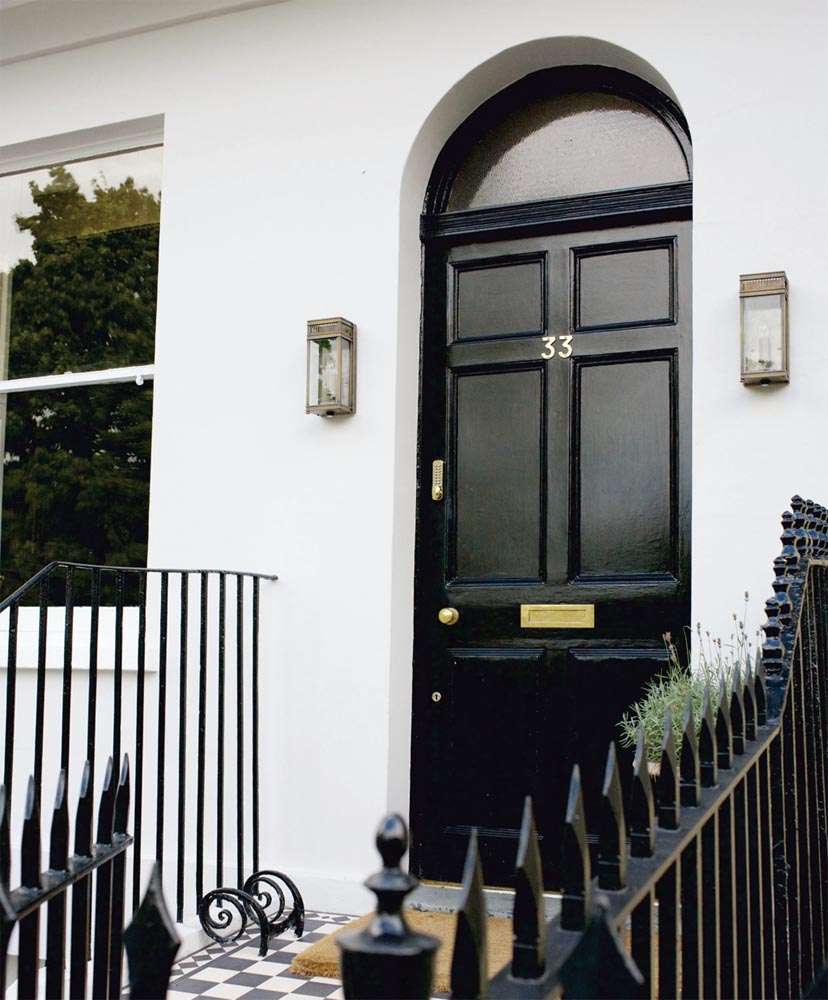 The Regency facade of the terraced house

Barry continued living in Thailand and commuted back and forth to oversee the renovation. He employed an architect to draw up plans, for which he sought planning permission, and delegated liaising with the local planning office to Andrew, ‘as he is so diplomatic.’ 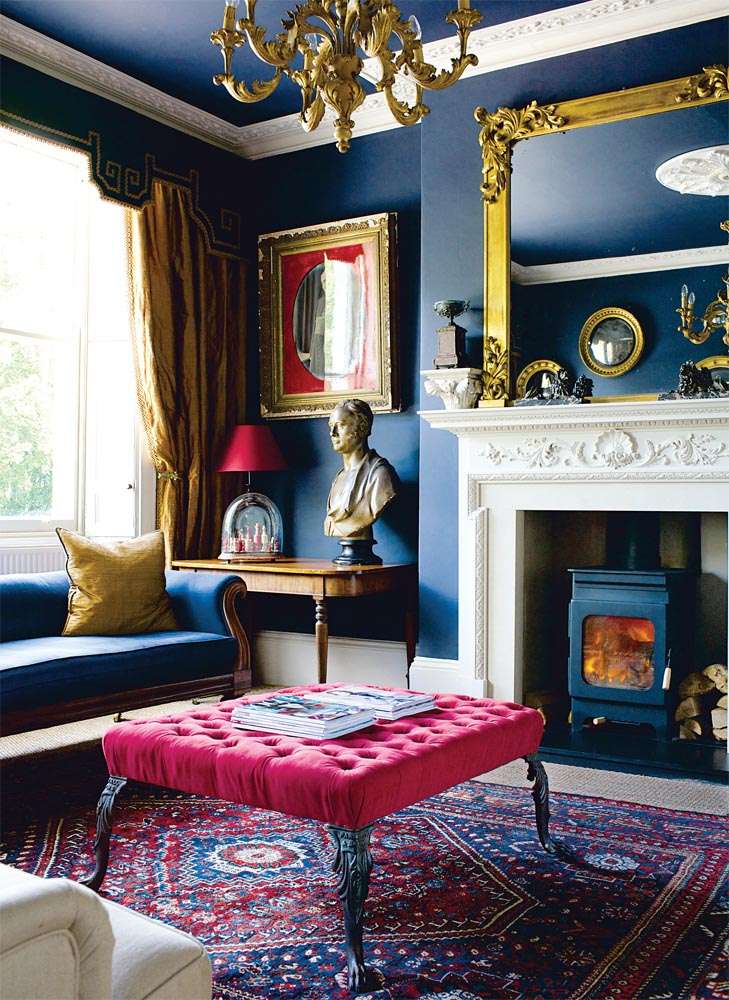 The Burley wood-burning stove is the focal point of the drawing room (burley.co.uk). Barry chose sisal flooring because ‘it is rugged and hardwearing’. The furniture was sourced by Blighty Antiques (blightyantiques.com) and the table lamps are from Fritz Fryer

The first task was to remove the partition walls that had been put in by the former hotel owners and repair the roof, ‘as there were buckets inside collecting the rain,’ recalls Barry. Next, specialists were called in to tackle the damp basement and to work off plans to replace missing joists. The plumbing and electrics were ripped out and new ‘green’ systems were installed from scratch. ‘When you have a blank building and start speaking to heating engineers about the possibilities, it is very interesting,’ Barry explains. ‘Taking advantage of a government scheme, we fitted a biomass boiler, which burns pellets, we have solar panels to heat the hot water and regulate the temperature, and a boiling water tap, which saves electricity. We also have lambswool insulation,’ he continues. Barry believes that the original shutters of the house ‘are the next best thing to triple glazing’, so he had them ‘properly restored’ – a painstaking and costly process – and finally added a wood-burning stove in the sitting room.

When the partition walls were removed, the builders revealed the original cornicing, which to Barry’s delight ‘was remarkably well preserved’ by being covered up for so many years. The ceiling in the master bedroom, however, had not survived so well due to damp, so Barry employed a craftsman from Gloucester who ‘matched it perfectly’. 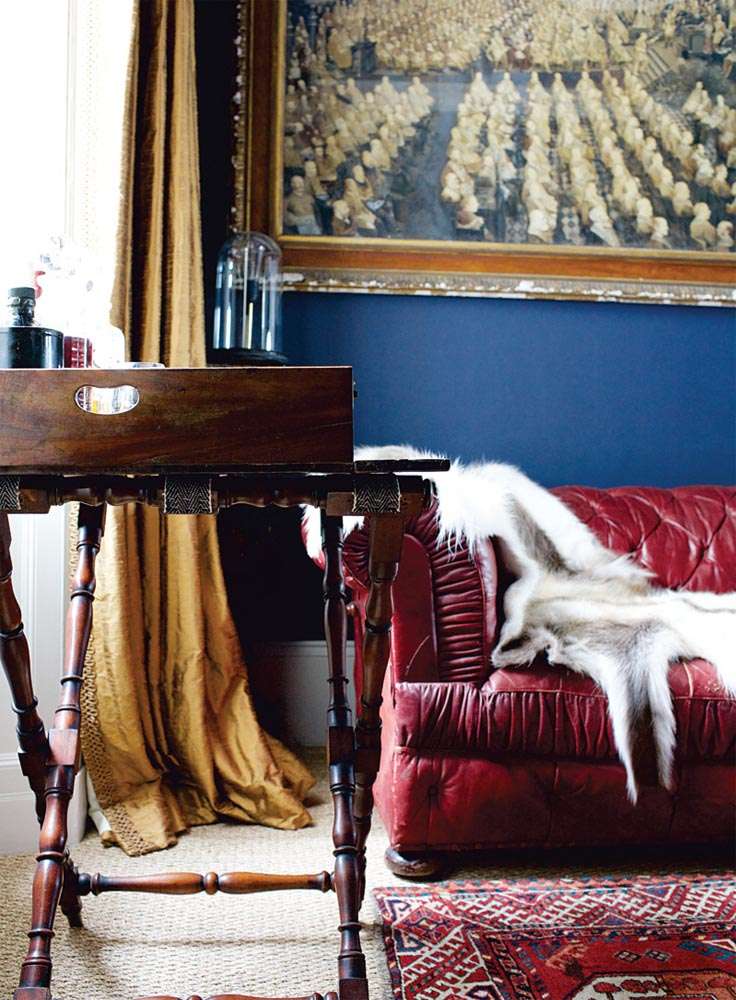 The drawing room has double doors into a more relaxed sitting room with a gentleman’s club feel, where battered leather sofas are covered in soft hide skin rugs

Getting the project to the shell stage took more than a year, and the renovation did not always run to plan. Barry sometimes locked heads with the local planning department as his ideas for 21st century living were not granted, despite him being ‘mindful not to commit architectural vandalism.’ He was also dismayed when he was advised to keep some unsightly 1970s additions to ‘preserve the historical journey of the building.’ Running the project remotely provided its own problems too. ‘Things went missing off site, including a couple of grands worth of copper pipes,’ he remembers. ‘Unless you are on site 24 hours a day and run it like a business, it’s very difficult to manage a long chain of contractors.’ 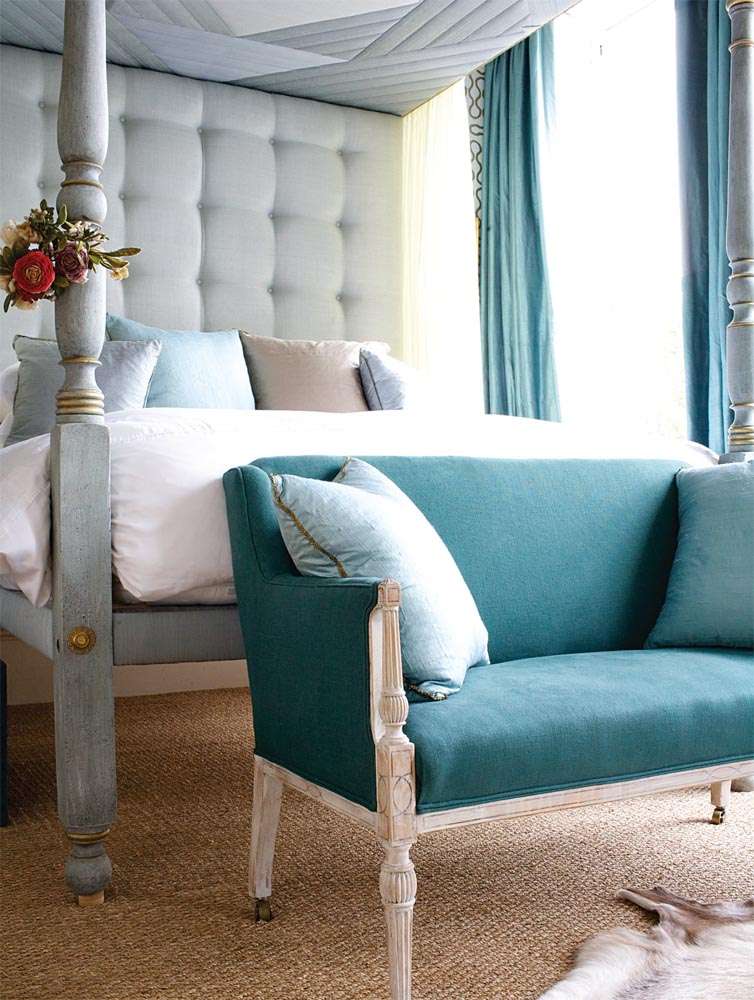 The master bedroom has a cool, calm palette without being too feminine. The colours came from an antique book that Barry treasures called ‘The Place of Crowning’ and were matched in James Hare fabrics (james-hare.com)

Barry also found the decorating stage of the project a challenge. ‘I had no experience of buying antiques before and I was out of my comfort zone,’ he reveals. ‘I bought a few things from salvage yards, but everywhere I looked in the house there was something that didn’t quite work or something I hated. I just didn’t have the buying experience or knowledge to put it right.’

He remembers the day that he ‘walked into Blighty Antiques (blightyantiques.com), a local shop, and saw antique mirrors and an oak dining table and it all seemed made for here.’ Barry invited the owner, Andrew Seccombe, to the house so that he could help him further in choosing pieces, and in consultation with their in-house stylist, Bronwen Da Costa Freeman, they helped Barry realise the decoration he envisioned and sourced the pieces he needed to create the home he wanted.

This is not to suggest that Barry had minimal input in the creation of the scheme; far from it. Indicating that he craved deep, rich colours and textures to create a masculine look that shouted England after living abroad, he was also clear on how he wanted to use the various rooms in the house and his influences, which he relayed in depth to Bronwen, who then created mood boards for them both to discuss and debate. 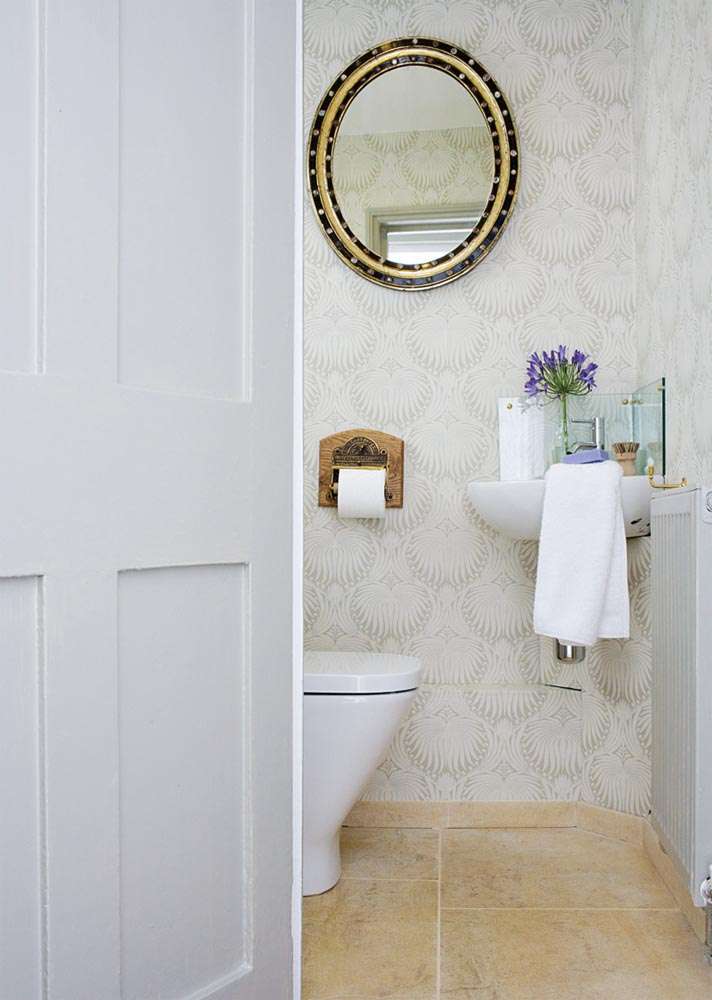 Bronwen used two rugs Barry had bought in Turkey – ‘one Turkan and one Persian’ – as the starting point for the colour scheme in the sitting room, and knowing Barry wanted silk curtains with a masculine edge, had some made in James Hare fabrics with a bold trim and pelmet.

Crucially, collaborating on the interior has meant that Andrew and Bronwen have managed to capture the ‘sense of humour and irreverence’ Barry wanted from an unconventional home, with eclectic and bold pieces. ‘I liked the idea of reinventing a country home in a way that is slightly rebellious, and with a twist,’ he says, unashamed that he needed help in finding unique and one off pieces and furnishings. ‘I have a good foundation to work from now. I’ve learned from people who know what they’re doing.’

Barry is now looking forward to building up his collection of art and objects from auction houses and travels, based on what he’s learned from Andrew and Bronwen, and the journey of creating his unique home. 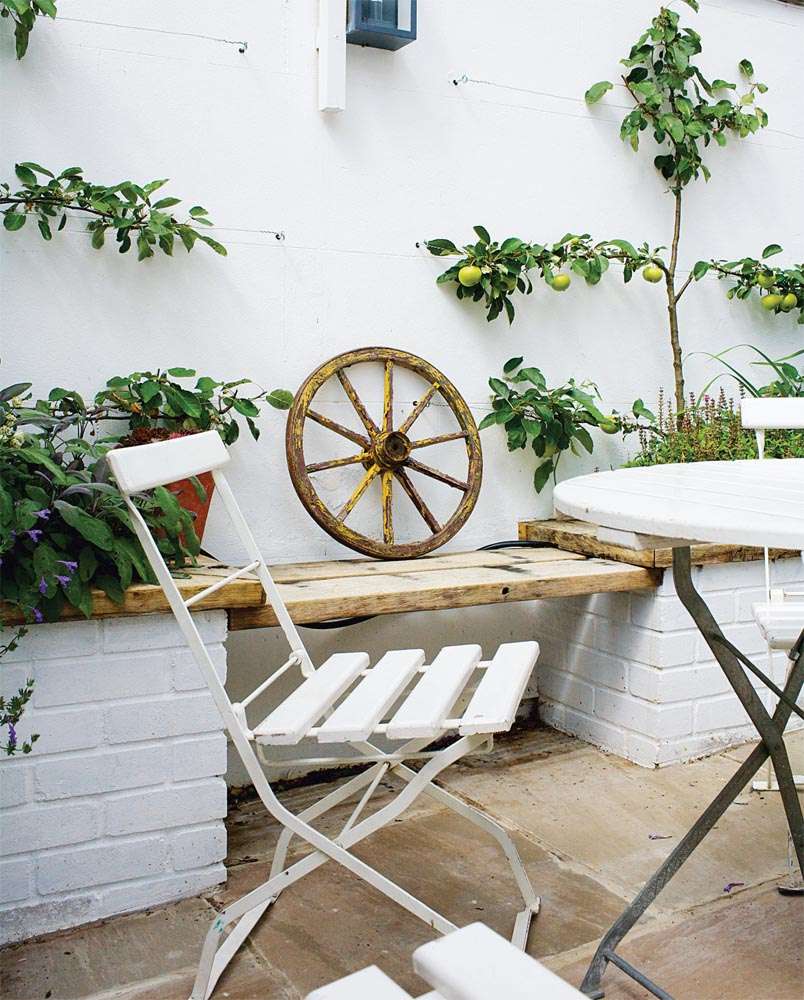 The courtyard garden, with simple rustic furniture, is a lovely spot to enjoy a morning coffee